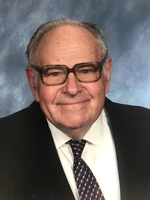 BUTLER, Charles H.S. Age 90, of Big Flats, NY, passed away on Saturday, August 29, 2020 after a period of declining health. Charlie was born January 9, 1930 in Chicago, IL, the son of the late Harold E. and Gladys F. Shattuck. At the age of 3, he moved to a farm in NY with his adoptive parents, Frank and Pearl Butler. Growing up on a hill in Willseyville, Charlie attended a one-room schoolhouse, skipped ahead four grades and ended up graduating high school at age 14 from Candor Central School in 1944. He received a Bachelor's Degree in Mechanical Engineering from John Brown University in Siloam Springs, AR in 1949 and a Master's Degree from Cornell in 1951. Charlie married Stella Polyniak on June 23, 1951. They made their home in LaPorte, TX and then Elkton, MD, while Charlie started his career with the DuPont Corporation. He was then drafted into the U.S. Army in 1954 and served 2 years of active duty followed by service in the U.S. Army Reserves until 1962. In 1957, Charlie landed his dream job as a mechanical engineer at Corning Glass Works where he remained for over 30 years. He pioneered the implementation of pollution control devices which removed hazardous smokestack emissions (including several patents to his credit). He loved to travel both for Corning and with his family, including trips to Europe, South Korea, Taiwan, Australia, Mexico and all across the United States. As an original charter member, Charlie was active in the founding of The American Baptist Community Church in Big Flats where he served on the Board of Deacons, taught Sunday School and loved to sing - especially solos - with the choir. He also loved hunting, fishing, gardening, golf, "Jeopardy" and ice-cream! He could be found blowing "Reveille" on his trumpet, working on a crossword puzzle, playing "Upwords" or feeding the birds and squirrels. Charlie was quite a character, just thinking of him brings a smile to our faces! He was especially known for his jokes and great sense of humor, always lightening up difficult situations with his positive, jovial attitude. A true gentleman, he was loving, kind, caring and competitive - especially at games, which he usually won! He was mischievous - always taking pictures and slides, which sometimes got him into trouble. With all of his accomplishments, he said he was proudest of his three kids and four grandchildren. Family was the most important part of his life. We shall truly miss him and will cherish the joyful times we had together. "Charlie Butler, you really had a wonderful life!" Charlie was pre-deceased by his wife of 65 years, Stella and his sister and brother-in-law, Russ and Katherine Manning. Charlie's legacy lives on in his son and daughter-in-law Dan & Madeline Butler of Laurel, MD; daughters and sons-in-law: Vicki & Phil Miles of Millbury, MA and Erin & David Boedecker of Middletown, MD; grandchildren: Clarissa L. Butler, Brenda M. (husband Justin) Ross, Victoria H. "Tory" Miles (fiancée Francis E. Brogie III) and grandson Benjamin F. Miles III; a nephew, four nieces and extended family members. The family wishes to thank his helpful neighbors, especially their friend Priscilla and his devoted caregiver, Lois, for all she has done for the family. Funeral arrangements are being handled by LYNCH FUNERAL HOME 318 WEST BROAD STREET, HORSEHEADS, NY. Due to concerns caused by the virus pandemic, no calling hours will be held. A celebration of his life is planned for a year from now. A private burial service will take place at Maple Grove Cemetery in Candor, NY with Pastor Mike Dickinson officiating. Words of condolence and memories may be shared at www.lynchsfuneralhome.com