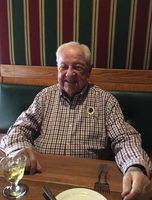 Robert R. Kaemmerer age 95 of Elmira, NY passed away on Sunday December 27, 2020. Bob was born in Washington D.C. on May 23, 1925 the son of the late Raymond and Esther Roberts Kaemmerer. He graduated from Cornell University where he received his Bachelor's Degree in Electrical Engineering. Bob graduated early to serve in The U.S. Navy during WWII where he attained the rank of Ensign. He and wife Nancy, attended school together from Kindergarten through High School. Bob married his wife, Nancy Linkins Kaemmerer, on July 12, 1947. He was pre-deceased by his wife Nancy to whom he was married for 66 years on July 7, 2013. Bob worked for Westinghouse Electric Corporation for more than 40 years and traveled around the world. He delighted many with his stories about those business travels. In his spare time, he was very active in Kiwanis, The Arnot Foundation, Chemung County Red Cross and The United Way. After retirement, he began painting and then elaborately carving decoys and shorebirds. He was an avid reader, an enthusiastic ocean fisherman, golfer and loved enjoying the beaches along the Atlantic. As many of his friends know, Bob was a fervent fan of both the Washington Redskins and the Washington Nationals. Bob is survived by his daughter, Lynn & husband John Sznopek, his son, Ken Kaemmerer & wife Jenny & Granddaughter Katherine, as well as nieces Linda Lee and Karen Linkins plus step-grandchildren Chris Sznopek & Gabrielle Hensley and their five children. Memorial contributions may be made to: The Elmira Kiwanis Foundation317 Glen Ave. Elmira, NY 14905 or The Arnot Ogden Medical Center Foundation 600 Roe Ave. Elmira, NY 14905. Cards and notes can be sent to: Lynn & John Sznopek Ken & Jenny Kaemmerer 1 Glenridge Dr. 950 Thompson Run Rd. Littleton, CO. 80123 Harwick, PA. 15049 Per Bob's wishes, there will be no services at this time. A Celebration of Bob's Life and gathering will be held in the Fall 2021. Arrangements are entrusted to the LYNCH FUNERAL HOME 318 WEST BROAD STREET HORSEHEADS, NY.